You are at: Homepage /  experiences /  visita al giardino ciucioi

Visit to the Ciucioi Garden

A journey into the visionary dream of the mysterious Tommaso Bortolotti

Visit to the Ciucioi Garden

An incredible nineteenth-century vertical garden, waiting to be discovered!

The Ciucioi Garden, also known as the Bortolotti Garden, is a unique hanging garden, where an intermingling of ruins and vegetation creates an atmosphere where dream merges with reality.

This original architectural work was inspired by the dream of a visionary late nineteenth-century entrepreneur, Tommaso Bortolotti. An example of romantic architecture, its objective was to create a fantastic, picturesque landscape, a highly unusual monumental edifice laid out on a series of terraces enclosed by whimsical architectural structures and connected by ramps, which reveals the influence of the eclectic tastes that prevailed in the first half of the nineteenth century.

Accompanied by an expert guide, you can make the intriguing, evocative ascent from terrace to terrace, discovering on the way a lemon-scented greenhouse, the loggia, an ingenious heating and irrigation system and other curious constructions such as churches, castles and grottoes. 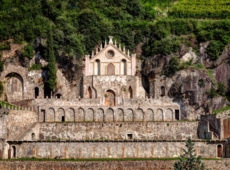 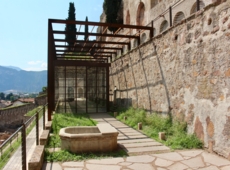 Admission to the Garden is by guided tour only.

- Languages spoken: IT, EN
- Time:  about 1.15 h
- Suitable for: adults, kids, groups (max 25 people). Easy route, but if you suffer from vertigo or claustrophobia be aware that there are many steps, terraces without guard rails and narrow passages. Flip-flops and high heels are not suitable. Dogs are permitted if held or kept away from the group.

The whole of Trentino in your pocket. Discover the card!