You are at: Homepage /  discover and explore /  points of interest /  castles /  firmian castle

Aristocratic residence of the Counts of Firmian, lords of Mezzocorona 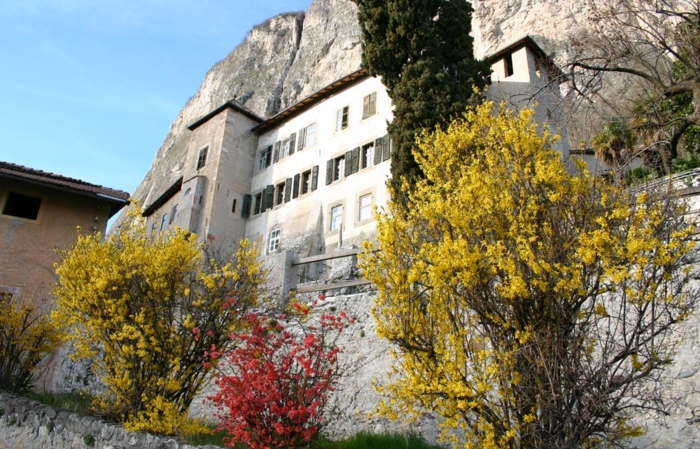 Castel Firmian (Firmian Castle) was built in 1480 on the orders of Nicolò I of Firmian, dynamic captain of the Valle di Non and the Valli Giudicarie, who decided to abandon the castle built into rock above (San Gottardo), in favour of a more comfortable residence that would be more in keeping with the tastes and living styles of the time. From that time up to today it has been the home of the Counts of Firmian, warrior lords and patrons of the arts. After the Mez family, the Firmian familyheld the (Tyrolean) right of jurisdiction over the surrounding lands until 1824.

The castle consists of a square tower and living quarters surrounded by a crenelated perimeter wall on the upper side and a moat on the valley side. An impressive portal adorned with the original coat-of-arms of the Firmian family was the former entrance to the residence. The entrance hall which gives access to the stairway up to the principal floor and to the portico is highly atmospheric with its vaulted ceiling supported by massive columns. It is overlooked by the southern tower, also known as the Mezzo tower, and is connected to the Roman road below by a walkway which ran from the castle to the public road below. This walkway was used by the count to control the traffic passing along the old road towards the Val di Non and the nearby ford across the river Noce. Over the centuries the castle has undergone various modifications: in the second half of the eighteenth century an extra storey was added; the fifteenth century windows were replaced with larger ones; a new wing which linked the spur tower with the watch tower was built on the south-east curtain wall; a two-storey hall was opened up; and the moat was filled in. In the following century the stables were built into the uphill side of the curtain wall near the watch tower, and other additions were made, including the “Servant's House”.

Aside from the Chapel of St. John of Nepomuk, which contains the old wooden statue of St. Gothard brought there from the Castello San Gottardo in the rock face, on display in the hall is an interesting collection of portraits of eminent members of the family, which together provide a general picture of the history of this powerful house, which played a prominent role in the power relations between the Mediterranean and Germanic regions. The most famous member of the family was Carlo G. Firmian (1716-1782), who was the Austrian governor of Lombardy. Patron of writers, artists and poets, he recognised the talent of the young Mozart, who was his guest in Milan.

Today it is the picturesque setting for unique events organised by the historic Martinelli winery next door.